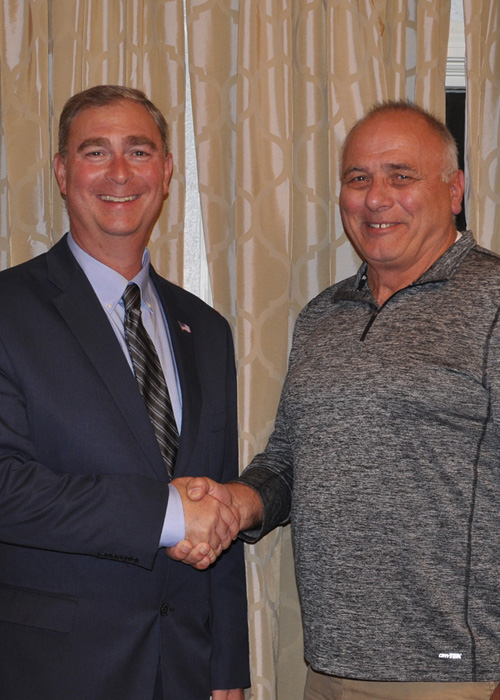 The Manchester Club held it’s monthly meeting this past Thursday October 18, 2018 at the American Legion hall. A large group of members and guests were in attendance. A delicious Chicken Kiev meal was served by the Scott’s, Adam and Taylor and crew. The Chicken Kiev was served on a bed of rice, with  a fresh garden salad, green beans and for dessert, ice cream on a whoopee pie. A great job by the whole kitchen crew.

After dinner, club President Alan Kirker, called the October mtg. to order, leading all present in the salute to the flag. He then requested a moment of silence for both Chris Nahatis and Sal Borgioli. Both Secretary McCoy’s and Treasurer Scott’s reports were deferred, until next month at the request of the President.

President Kirker, then requested the clubs new members come forward as listed and receive an Manchester Clubs lapel pin. They were as follows: Mike Coyne, Mark Dobson, Robert Edwards, Richard Rogers, Paul Fiahlo, James Harrison, Brian Palmer, Peter Morrissey, Paul Stone and John Saco. A round of applause was to them by all the other members.

With no further club business President Kirker, introduced  the speaker for the evening, State Representative of the 4th Essex District,  Mr. Brad Hill of Ipswich. He district covers Hamilton, Ipswich, Manchester, Rowley, Topsfield and Wenham. Brad gave a very interesting talk. He said that the populations of the towns increase or decrease all the time.

Other highlights of his talk were what he and Senator Tarr have done over the past years including towns receiving various amount of money, improvements to the highways such as Rt.127, also that Manchester received over Five hundred thousand dollars for the improvement of the Central dam outflow, downtown, which the cost of the project is over a million dollars.

Brad also mentioned the monies and funding for our harbor dredging that was done over this past year. He works very hard to increase funding for his district.  Brad’s talk was really very interesting, a short question and answer session was held, he then received a great round of applause and will receive a certificate of appreciation from the club.

A door prize was won by Charlie Franklin. The evening was enjoyed by all. See you next month.

The Manchester Club has provided a meeting place for men in and around the North Shore community since 1905. We meet every third Thursday of each month from September to June in Manchester by the Sea, MA to socialize and hear local and regional speakers.

But most of all it provides a great place to get together in a time in which it seems increasingly difficult to be a community. It’s informal, it’s fun.

It also has an important social role in providing scholarship monies and collecting resources for local organizations.